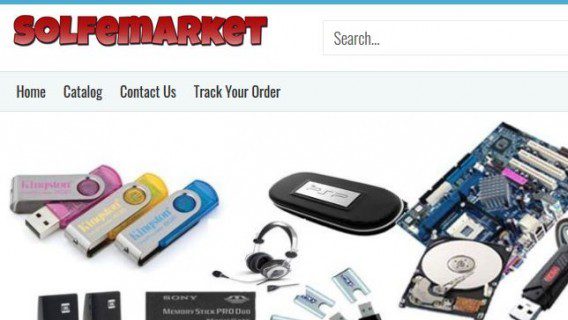 You’re probably here wondering about SolfeMarket.com and whether they are legit. Well, we’re here to help bring clarity to this very issue. Unfortunately, this scammer has been doing this exact scam for a while.

It definitely doesn’t appear to be so. We’ve checked it out, and from what we found, SolfeMarket isn’t a site that we would recommend you use. With privacy policy errors, sketchy discounts, and look-a-like sites, it’s best to steer clear from SolfeMarket.

We don’t blame you. They are a common problem, especially for those who keep getting scammed. If you are one of those people, we’ve created a video course that teaches you how to avoid that.

Most likely, you came to SolfeMarket because you saw that they seemed to have products on their site for a fairly low price. Well, as you know, looks can be deceiving.

As you can see in the above screenshot, every single product that they have listed on their site is discounted down $20.05 dollars.

Whether it’s a refrigerator or a tent, each one of these items are marked down to under $15 dollars. Which makes the whole site look pretty sketchy.

When checking out whether a website is legit, it’s always best to see if the owners of the site set up their legal pages correctly.

Make sure to read their Terms of Service, Privacy Policy, and even Shipping Refunds and Returns. Because most likely, you’ll find something that will lead you to who the owners really are.

If you take a look at the above image, you’ll notice that we highlighted some text in the screenshot. Each highlighted text starts with ‘INSERT’.

When the owner(s) set up SolfeMarket, they forgot to actually add all the relevant information into the Privacy Policy to make it authentic.

What you have on SolfeMarket.com is a default Privacy Policy that is given out to each site when it is created. And that default page needs to be updated and changed to fit the site’s rules.

If a site doesn’t have a Privacy Policy, or has one that isn’t set up properly, then it’s never a good idea to shop at or use that site.

So shopping at SolfeMarket is no different.

SolfeMarket may decide that they want to keep all your information. Maybe they’re want to sell it to third parties. Maybe it’s something else entirely.

Whether or not SolfeMarket is doing or could do all those things isn’t the point. The point is that they have a very messed up Privacy Policy, and for that reason, it’s best to avoid using them.

No PayPal For Purchase?

If you scroll all the way down to the bottom of SolfeMarket.com, you’ll find that they claim they have a secure checkout in place.

One of those ‘secure’ checkouts is through PayPal, or so they claim on their site.

This is, once again, a typical ploy used by scammers to get people to think they are legit. Because if a site is using PayPal, then they are usually authentic, right?

In all actuality, using or not using PayPal doesn’t really show anything about authenticity. But what does show a lack of authenticity is when a site claims they use something, but in reality don’t.

Scammers, for who knows why, will often put up that they allow purchases to be made through PayPal. But when you get to the actual page to purchase something, you find that this isn’t quite true.

As the screenshot above can show you, SolfeMarket doesn’t allow PayPal to make a purchase. We’re not going to say that this immediately makes them a scam, but it definitely adds to the weight of an argument for them being one.

If a site claims something, but then doesn’t actually allow that certain thing they claim, then it doesn’t bode well for anything else they claim.

It’s entirely possible, assuming we follow the logic all the way through. If they are lying about one thing, then what else is SolfeMarket lying about?

We actually looked into a site very similar to SolfeMarket about two months ago. Though was called Allcamarket.com. Make sure to check out our review here.

In the end, from what we’ve found on the site, it does appear to be that SolfeMarket is a scam and not legitimate.

They have the same exact discounts as did AllcaMarket.com (and the same design), and they don’t appear to have a proper Privacy Policy. On top of that, they are clearly lying on their site about using PayPal to make purchases.

But that isn’t all. There are dozens of reviews online that all say SolfeMarket is definitely a scam.

In the end, SolfeMarket is best to be avoided, and not trusted. It will only bring about loss of money and headaches.

Learn Not To Get Scammed!

All the information we presented was all free for the taking. It’s
just a matter of learn what to look for, as well as knowing resources
that will get you the answers you want.

Over the last few months, we’ve compiled our method for detecting
online scams, and have created a video course about it. It goes through
free resources, as well as the different ways that we use to check if a
site is indeed a scam.