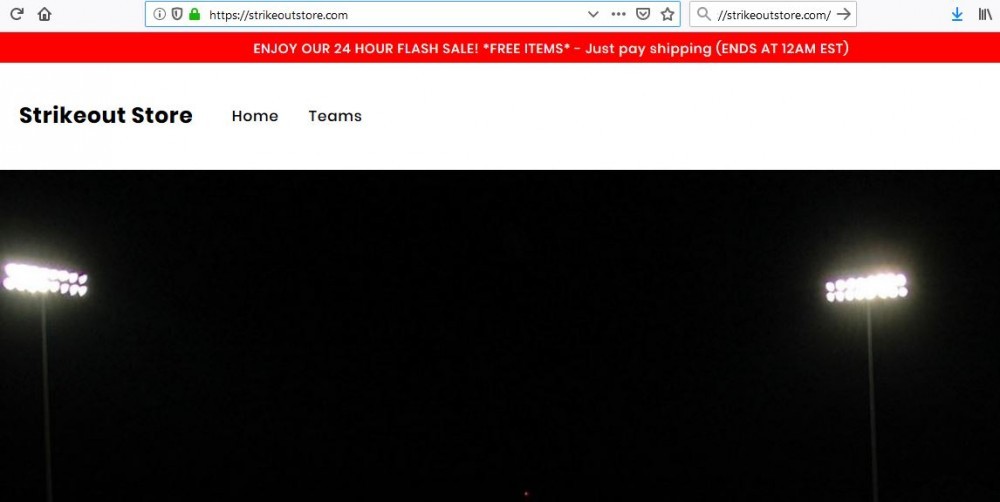 Facebook ads seem to be laughable now-a-days. Over the last few months we have received a lot of requests from sites that people saw through some sort of social media ad. And the majority of them appeared to be fraudulent.

Is StrikeOut Store a scam? That’s just what we’re hoping to help clarify in this article. With all the scam warnings that we found on the site, it does appear to be not as legit as it seems. It’s our hope that at the end of this article, you’ll have picked up some ideas on just how to spot an online fraudulent website.

We’ve created a video course to make sure you can learn from yours and others’ mistakes. Take action today, and get our video course on how to detect a scam website for 50% off.

Strikeout Store is a site that sells baseball shirts from a bunch of different teams. White Socks, Red Socks, Yankees. You name it, they probably appear to have it.

However, the strange thing is that they aren’t exactly selling anything on their site. They appear to be giving away all of their products – free of charge!

Okay, so nothing is really free, right? There is a shipping charge that they tack on. But beyond that, the site makes it appear that everything is indeed free to purchase.

But is this really true?
Well, sadly, for all you baseball fans, it isn’t legit at all.

Here’s the thing with the above screenshot. They claim that it ends at 12AM Eastern time, and that it is a 24-hour flash sale for these free items.

But, you see, we’ve seen this type of scam before being actively promoted through Facebook ads. Check out our review of CatsNKitties, and OnNobleSportsStore, to see just what we mean. It appears that these scammers are doing their same scam over and over again, just by changing up what they’re ‘giving away for free’.

Also, you’ll probably be reading this after 24-hours, and the sale will still have been going on. Our guess is that this 24-hour sale has been going on since earlier last week.

When we looked up just when the domain was registered (StrikeoutStore.com), we found that they were created just over a week ago:

So, more than likely, they’ve been doing this for a while now. And sadly, there isn’t much we can do to stop them. People have tried letting Facebook know about the previous sites, but they don’t appear to be doing anything. The only thing we can really do is, well, write reviews of sites that are scams, and let others know about these fraudulent websites.

As you can see from the above screenshot, we’ve highlighted a few places where the Privacy Policy just wasn’t set up correctly. We believe that the site used a default template that is supposed to be filled in, but Strikeout Store never actually did any of that ‘filling in’.

This doesn’t exactly mean that it’s a scam, but it does make it look like a pretty unrealistic website. The Privacy Policy is an important aspect of a site, and if a store can’t get that right, then it probably doesn’t deserve to be shopped at.

If we had to choose whether to shop at a site that had these errors, we would immediately choose not to. There just isn’t enough trustworthiness from this Privacy Policy to make us want to actually believe that they are a legit site.
In the end, if you ever find a site that doesn’t have their Privacy Policy set up correctly, or on that is keeping/selling too much of your data, then it is highly recommended to not use the site, nor purchase from their online stores.

Sometimes, in a way to promote a newly established business, sites will give away things for free, but then they tack on a larger shipping charge per item, and not per order. So, just because something claims to be free on the internet doesn’t immediately mean that it’s a scam.

In the screenshot above, you will notice that we added one shirt to our cart. They gave us a $14.49 shipping cost for that one item.
We decided to check and see whether that shipping charge would change per item, or per order. Since the shirts were ‘free’, we added 1000 shirts to our cart, to see how much our shipping cost would be. The answer? $14.49.

If this was a legit company, this would definitely not be what would happen. They would never give away 1000 shirts for only $14.49. We’re not even sure if you could ship that many shirts with that small of an amount for shipping!

Is Strikeout Store A Scam?

It does appear that Strikeout Store is indeed a scam. It appears like it is the same scammers that have been doing this for a while now, and are unfortunately getting people to fall for it each time.

The Privacy Policy isn’t set up correctly, and they are giving away too many products for too small a shipping charge to be legit. Overall, it’s definitely a site that we would recommend everyone to steer clear from and avoid.

Also, in the case that you came to this article after you ordered from StrikeoutStore.com, we would highly recommend that you cancel your credit card, since comments that we received from the other sites claimed that their credit card info was copied and used by someone else.

(Note: We can’t be certain this site is also copying credit card info, but with the nature of how they are set up, and how similar it is to the other sites we’ve reviewed, it’s always better to be safe than sorry).

Thanks to Norrisa for asking us about this, and letting us know about this site! If you have any thoughts or experiences with Strikeout Store, make sure to leave your thoughts in the comments section below!

17 thoughts on “StrikeoutStore.com Review: Strikeout Store Stuck Out (Too Many Scam Warnings)!”