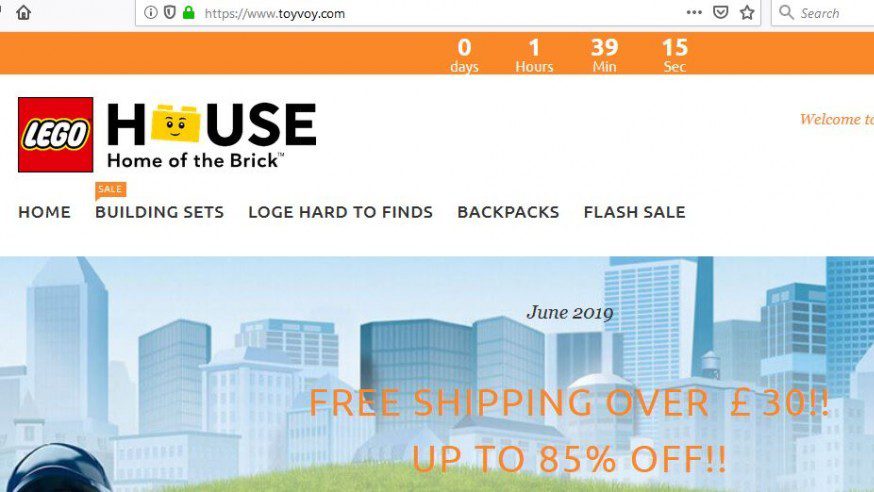 ToyVoy.com came to us recently through one way or another. When we looked at it initially, we found several errors in the site the concluded to us that they were indeed a scam website.

Is ToyVoy Legit? Not from we saw on the site. In this article we’ll do our best to help show you just why we believe ToyVoy.com isn’t an authentic shop, nor why they should be trusted. Hopefully this review will help you think twice before purchasing through stores like these.

This is an automated report on ToyVoy.com, so our apologies if it doesn’t come out exactly right or sounds a little too generic (or vague). If we get enough people interested, we will write a more detailed article about ToyVoy!

When going to ToyVoy.com, the site seems like a normal one. On their site, they claim to be a store that offers discounts and lower prices. So much lower that they claim you can save 30%-70% of the retail cost, or so it seems.

Now, like we said, we could stop our review there, and say that the site is indeed a scam. But, just because we’re convinced that it’s a scam, doesn’t necessarily mean that you, the reader, are convinced. So, it’s on the next
issue with the site.

ToyVoy.com claims to sell certain brand products. As most of you know, Lego is (most-likely) a major producer of quality products that they offer. It’s a popular brand among the circle that Lego is in. But, when you take a closer look at ToyVoy’s site, you find that they aren’t only selling Lego
products, but they are also claiming to be Lego as well.

It should be obvious to most that this isn’t the official store of Lego, right? Their site doesn’t really seem up-to-date as what an official site would look like, as well as their domain name, ToyVoy, doesn’t exactly seem like it is
Lego. But, even though these things aren’t so, they are still claiming to be Lego.

If you take a look at the screenshot above, you will notice that they have as a logo, or as words, Lego’s brand. If that isn’t enough proof, then we’re not sure what is. But, there actually is even more proof.

As noted in the above image, the name they put on their copyright notice is “Lego”. ToyVoy is without question trying to impersonate the official Lego website.

It means that the site we’re looking at is illegally pretending to be someone that they really aren’t. It means that ToyVoy is trying to make anyone on their site think that they are the real Lego site and store. And that is just plain wrong.

While we can’t say with certainty that Lego’s products aren’t legit, we can say that they are definitely doing something illegal and because of that, they shouldn’t be trusted or used.

Can We Prove ToyVoy.com Is A Scam?

So, this site and the owners of it, seem to have been doing this for a while. Which makes it no surprise that ToyVoy.com is a scam.

ToyVoy.com Is Indeed A Scam!

All in all, ToyVoy is a site that we would highly recommend you don’t purchase from, nor trust the scammer behind it. You’ll only be left with headache and heartache.