We recently received the following inquiry through our contact form, requesting us to take a look at a certain website:

E-vaporizerUK? Interesting name, and an even more interesting site. One that definitely comes across as a site that has something to do with e-cigarettes, or so was the inital thought. But, as we’ll soon see, E-vaporizerUK is a site dedicated to something completely different.

What is E Vaporizer UK?

I will admit, when I opened my email today, I looked at this submission, and asked myself, what have I gotten myself into? Here I am, looking at some site that I have no clue about, and my report could be the potential make or break of this site (okay, so I don’t have that much power, but bear with me).

On top of that, I thought it had to do with E-Vaporizers, of which I have no clue on. But as we’ll see below, this site has nothing do to with vaporization. What it does have to do with, is shoes. 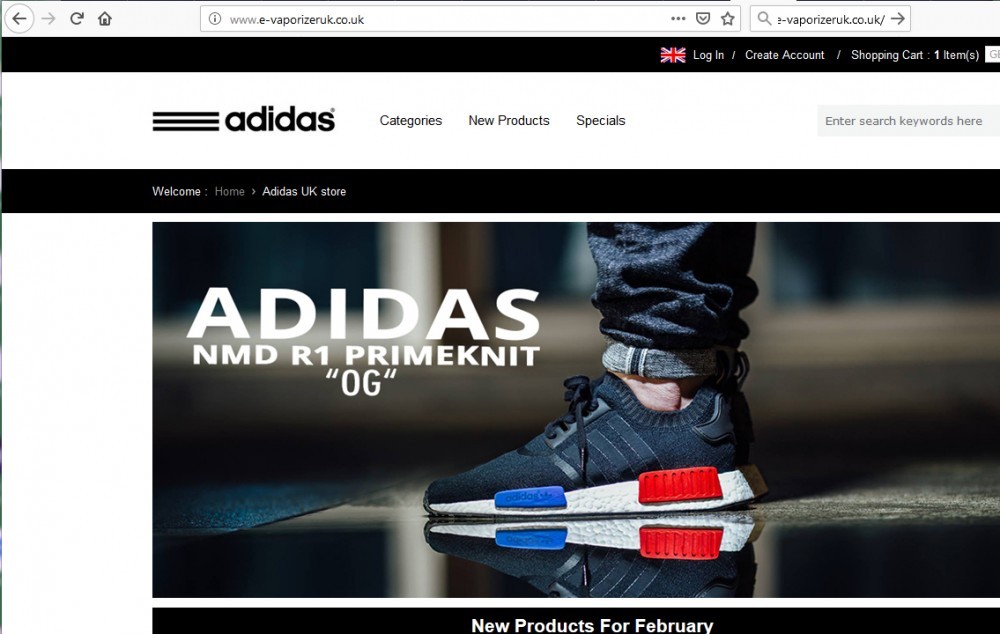 Yes, you read that right. This site is all about shoes, specifically Adidas shoes. And if there is anything that I know less about than electronics, then it would have to be shoes (I personally don’t wear shoes often – but that can be for another time and place).

Thankfully, the question asked about the site itself, and not the products that were being sold on it. So let’s look at what I was able to find while examining the site.

What Does The Site Reveal?

The very first thing that should be pointed out, is the lack of similarity between the domain name and the products being sold.

You have a domain name that has e-vaporizer in it, and you have shoes being sold on the site. So the domain gives an appearance of something different from what’s really on the site.

When domains have been around for a while, their domain will usually get sent around, and placed on other websites. When this happens, it creates something called backlinks, because the URL links back to the original domain. Now because of this, these sites can sometimes be seen as more valuable.

These backlinks bring traffic to the site naturally (because they’re spread all over the place). Many times, people will buy a used domain that has a lot of backlinks, in order to have more traffic come to their site. And that’s my best guess as to why e-vaporizeruk is selling shoes.

In other words, while this seems strange, it’s been known to happen before, and so shouldn’t be a major ‘red flag’ that would turn us away from using this site to buy these certain shoes.

But there is more to look at.

Looking at the privacy policy can help reveal what exactly is going on with your data, and how it is handled. While there isn’t anything wrong with this certain privacy policy, there are some rather strange English wordings that makes me wonder if something else is going on.

You’ll notice that in the above screenshot, I’ve highlighted 3 different places where the wording of the privacy policy just doesn’t quite make sense.

Once again, this doesn’t really mean that this site is a scam, but it definitely gives it a bad reputation. The privacy policy especially should have proper grammar, so that we can all understand what they’re really talking about, right?

The Lack Of Social Media

As you can from the above screenshot, they have social media buttons on their site, which, if you choose to click them, should direct you to their social media accounts.

Unfortunately, those buttons are just for good looks. If you click one of them, it just redirects you to the social media platform itself, and not to anything related to E-vaporizerUK.

So why are the buttons on the site? If they don’t help with the site, then get rid of them (or at least that’s my personal opinion). Of course, this also isn’t exactly a ‘red flag’, as these buttons could just come with the website theme they choose to use, and thus they’re stuck with them.

What-ever the case, it does seem a little strange that they have social media buttons on their site, without a social media presence.

Can You Use PayPal To Pay For Things?

If you look at the bottom of the page, you’ll see that PayPal is a supposed method for paying for a product.

Weirdly enough, when you go to actually make a purchase, you don’t seem to be able to use PayPal as a method for paying. 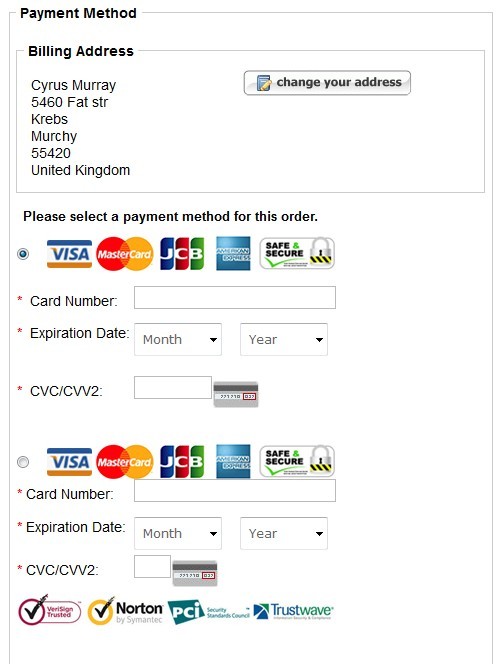 I tried this on three separate products, so it definitely doesn’t look like it’s a fluke. They clearly say that they accept PayPal, and then they don’t actually live up to that.

Also, I don’t know why the billing method has two different payment methods (which are just the same). Maybe another error on their end (we seem to be seeing a lot of those)?

Creating An Account And The Email Associated With The Site 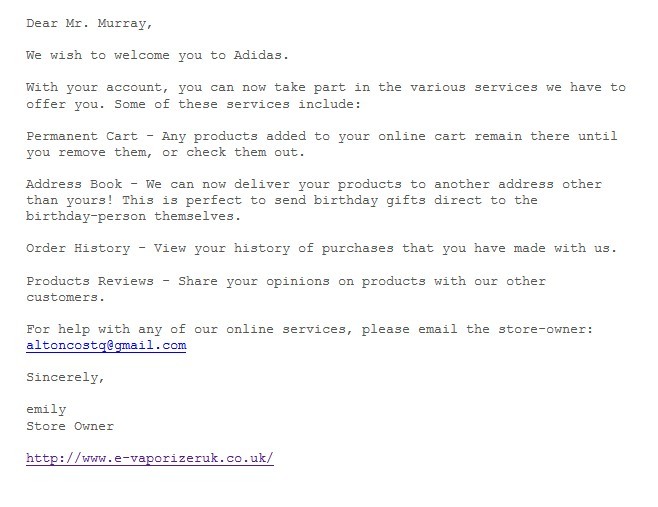 This email left me with some more questions: Who is this supposed Emily? And why does she use the email address altoncostq(AT)gmail(.)com?

I don’t know, but a quick search reveals quite a bit about the email address. 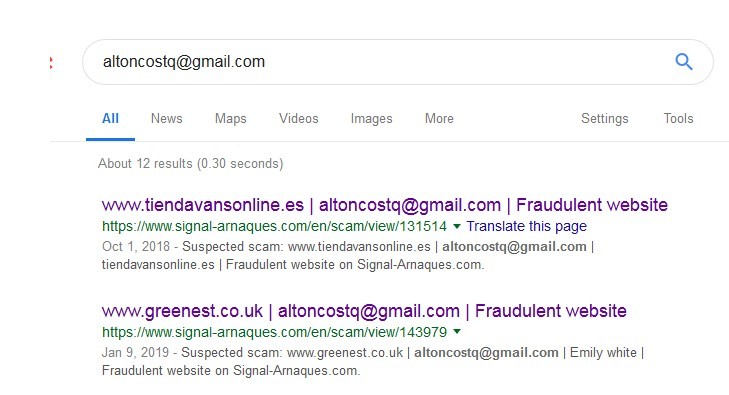 Rather interesting. If you do the search yourself, you can scroll down further, and find quite a few more sites where this particular email address can be found on.

What does this all mean?

After finding out about the email address that’s connected with the site, I would say that this site isn’t legit. Or at least, I personally wouldn’t use this to buy shoes from.

The email address, and Emily person, seem to be connected to too many scam sites to have E-vaporizerUK be legit. On top of that, their privacy policy, lack of social media, and faulty PayPal system all add to this site’s illegitimacy. So I personally wouldn’t recommend this site to shop at.

As always, it was a pleasure to take a look at this site, and examine it for its legitimacy. If anyone else has a site they would be interested in We Get Scammed For You to take a look at, feel free to let us know via our contact form.

What about you? Have you had any dealing with this site or Emily? What are you thoughts about this website? Don’t hesitate to share your answers in the comments section below!

2 thoughts on “Is E Vaporizer UK a legit site? Our Thoughts On E-VaporizerUK.co.uk”