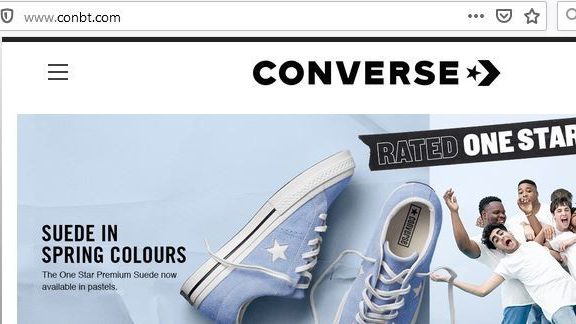 We received a contact form request asking us about a site called Conbt.com and what we thought of it. When we took our initial look at it, we immediately surmised that it was a scam, because of the way the site was laid out (more details on that later).

Conbt.com is a site run by a scammer who has his hands deep into the whole scamming realm. We’ve run into him multiple times, and it doesn’t appear that he’s yet to give up his scamming ways.

Protect yourself from getting scammed online by checking out our video course, How To Detect An Online Scam, today!

The very first thing that we find on the site is that Conbt is pretending to be Converse, a popular shoe brand that is now owned by Nike.

If you take a look at the above screenshot, you can see clearly that they are trying to pretend that they are Converse, since they show the logo, and the name right on the top of their site.

If a site ever claims to be a certain brand, and they don’t have the same domain as the brand (especially popular, well-known brands), then it is more than likely a scam.

And Conbt.com is no different.

Conbt is using Converse’s copyrighted images, as well as their logos to promote their scam. What their doing is illegal, immoral, and down right wrong.

But, being an impersonation website isn’t the only thing that shows them as being a scam.

Sites that claim to have discounts should be ones that you are very skeptical of. You’ll notice on Conbt that they have many shoes marked down nearly 50%.

Scammers love to use discounts and low prices to bring in traffic to their site. Many people will think, “It’s only $10, $20, $30 dollars that I’m going to lose if it is a scam. So what do I have to lose?”

Conbt Using The Same Theme As Other Scams

We know, it’s strange that we can tell whether a website is a scam by looking at its design. But it is actually partly true.

When we first looked at Conbt, we knew that it was a scam because of the way the scammer had made the site. Depending on how you viewed the site, you may (or may not) have noticed the gray side bars. A screenshot above helps show them.

We’ve looked into hundreds of sites, and have found several fraudulent ones that use the same exact theme as Conbt.
Now, you definitely do need to be careful judging a site by its design. But Conbt.com is a very unique design. We have yet to find any other legit site that has the same layout as theirs.

Make sure to take a look at our review of Porbc.com and Norkz.com. The images in those articles should help you see the similarities between them all.

So do we have any proof that they are actually scamming people?

For whatever reason, this scammer loves to use the same email address over and over again. You can tell more about a site by the email they use than by nearly anything else on the actual site.

If you go to Conbt and scroll all the way down to the footer, you’ll find three email addresses that the owner added. We have a screenshot of them above.

You’ll notice that in the screenshot, we’ve highlighted one of them, Support@jdonline.info.

We’ve come across that email address so many times, we honestly can’t count the number. But each time we have, we’ve only found one scam website after another.

As you can see above, that email address has been connected to dozens of fraudulent websites and scams. When it comes to scamming people, they definitely know what they are doing.

Interestingly enough, when we looked up the other two email address, we found that they also are connected with several other fraudulent websites as well.

In the end, all three email address say the same thing: Conbt is a scam, and one that you shouldn’t use or trust.

Conbt Is A Fake Converse Shop!

There really is no denying it – Conbt is a fake Converse store. They are using copyrighted logos and images, running sketchy discounts, and don’t appear to be afraid to put their fraudulent email addresses out on display for everyone to see.

All in all, Conbt is a site that we would highly recommend you don’t purchase from, nor trust the scammer behind it. You’ll only be left with headache and heartache.

Learn Not To Get Scammed!

We know what it’s like getting scammed – we’ve gotten scammed plenty
of times. But because of this, we were able to find similarities between
many scam websites.

We created a video course, How To Detect Online Scams,
in which we explain these similarities and methods we use to check a
website. And we’re happily able to offer it to you for a discounted
price.

Unfortunately, we can’t really give you the money that you lost by
being scammed (if you did get scammed). But we can give you our course
for a cheaper and more affordable price.

Follow the link below and get our course for 50% off of it’s original
price. It’s our way of trying to help out those who have been scammed
before, and/or those who don’t have a lot of money to spend!