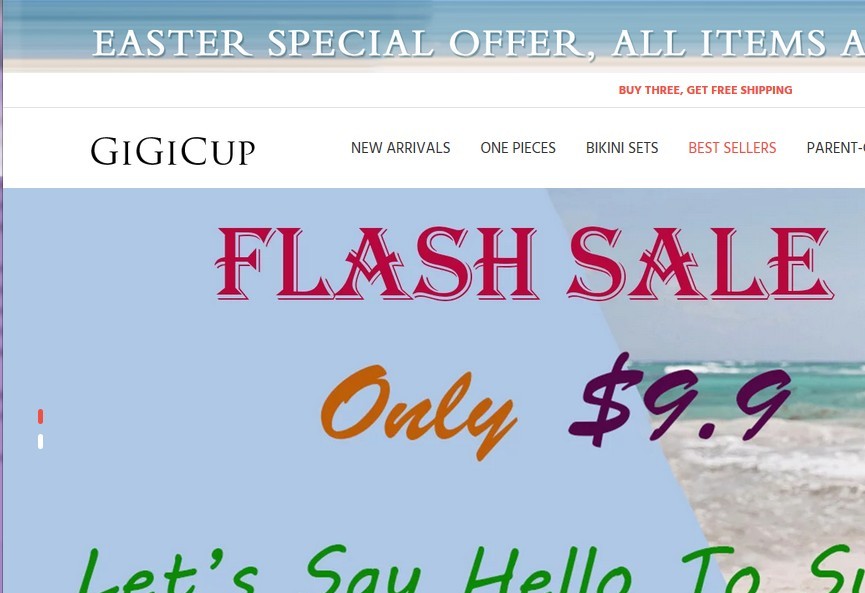 Gigicup.com came to us a few weeks ago, and when we looked at it, we added it to our list of possible scam websites. The main reason being that they seemed to give a bogus address, were using three different email addresses, and (when we reviewed it), they seemed to have everything for the same price.

Recently (within the last day or so of posting this), we were asked again about this site, and so decided to take another look into it. We had unfortunately thought the site had gone down, but realized that we were going to the wrong domain (if we had known this, we would have reviewed this much sooner).

Is Gigicup a scam? That is the question that we hope to answer with this article. As you will soon see, we come to the conclusion that, while it may not be a scam, it also might not be a site that you want to purchase from. But we’re jumping ahead of ourselves. 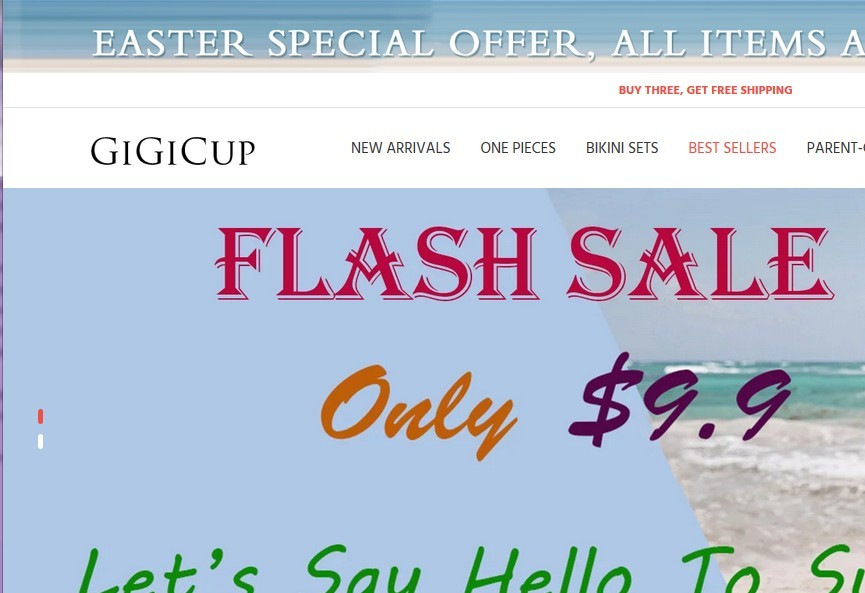 Gigicup.com is a site that seems to sell beach clothes. Swimsuits, bikinis, and other swimwear can be found on this site. And what’s interesting is that Gigicup has a sale going on that everything is $9.90.

Discounts are common ways for a scammer to get someone to their site. They’ll offer something for a low price, and because it is often to go to be true, the person will buy it and get scammed. Of course, we’re not saying that Gigicup is a scam, but we’re just stating what we know.

Because of the site looking similar to a scam site, we decided to investigate further as to what this site was, who was behind it, and if it was connected with anything else.

Email Address And Connecting The Dots

Email addresses will often tell a larger tale about something, especially if they are connected with other websites, or with some sort of fraudulent scheme.

Unfortunately, that wasn’t the case when we received an email address from Gigicup.com. But it did leave us a bit confused.

The email we received seem to not have any connection with Gigicup. This made us even more skeptical, especially when the email address came from a site called Sotita.com. But, we found something even more strange on Gigicup.com’s Privacy Policy:

So, we went to Sotita.com and checked it out. It was a site that had a similar layout to Gigicup.com, but was selling dresses (among other things). Sotita.com’s pages, like the Terms of Service, Privacy Policy, About Us, Delivery, etc, were nearly identical (if not exactly identical) with Gigicup.com’s pages.

What’s even more stunning is that if you go to the end of the Privacy Policy (both on Gigicup’s and Sotita’s), you find another email address that comes from a completely different domain!

The email address we found on the Privacy Policy went to a site called SmartWayIn.com, which was also selling swimwear at $9.90. Long story short, as we were searching around SmartWayIn.com’s site, we found that they were connected to shop.FanMart.com

Feel free to take a look at both of those sites, and you’ll notice something very interesting. Besides for the domain name, they appear to be exactly identical of each other! Now, maybe where you come from this is perfectly normal, but when we come across two different sites that are identical, it usually means you’re dealing with some sort of fraudulent website.

And here is where things get a little more confusing.

We decided to see just who was behind these two sites, SmartWayIn.com and FanMart.com. To do this, we quickly added some clothing to our cart, filled out all the info, and opened PayPal as the payment method. Up top, we saw just who we were paying to:

These sites are owned by a company named Micro Bee Limited. There really isn’t much found on the internet about them, but we were able to find that they were a registered business in Hong Kong.

Now, why is this so interesting?

If we do the same exact thing with Sotita.com, or Gigicup.com, we come to find out that they actually are part of a different company name. They claim to be part of a company called YouMobi Co., Limited. 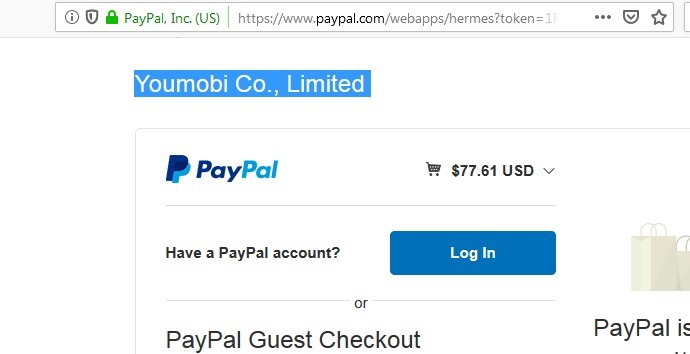 Doing several searches on the internet doesn’t really reveal much about YouMobi Co., Limited. They do have a LinkedIn page, but it doesn’t seem like there is much that can be gleaned from it.

The question that arises from this is, why do these sites have two different company names? Why are these sites associated, but don’t appear to be part of the same business? There could be a possibility that Micro Bee Limited owns YouMobi Co., Limited (or vise-versa). But there isn’t anything to suggest that anywhere.

Similar Sites And A Review

We did some more poking around the internet, and found two other sites that appeared similar to Gigicup.com. They were Yssdress.com and Chicgaga.com. Both were extremely identical to Gigicup, with similar images, as well as the discount of $9.90

Also, one of the sites also mentions Gigicup in their About Us page (the other one does in search results, but doesn’t actually on their site, as it appears the About Us page seems to have been deleted).

That’s now about four sites that we have found that are similar to each other, as well as two other sites that are identical to themselves.

But we continued searching.
When we searched for reviews of Gigicup.com, we found one review posted two days ago (as of writing this) from Trust Pilot, a popular place to leave reviews.
Now, you do need to understand that there has been sites that will go onto Trust Pilot and leave fake reviews to make certain sites look more popular. So we must always use Trust Pilot with caution. 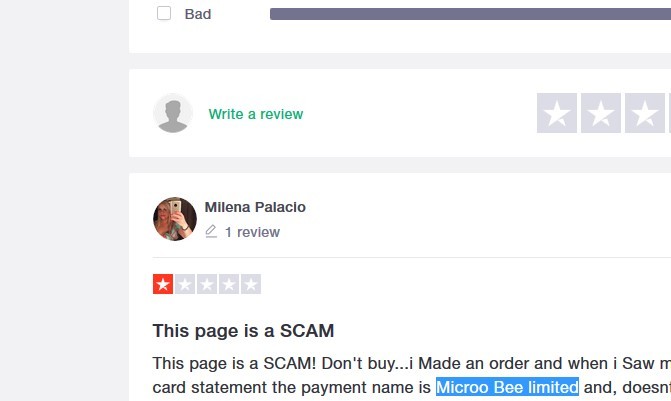 The reviewer tells about how they made a purchase and their card was billed, but they never received any sort of tracking number, nor the product either.

They also mention the name of who billed them – Micro Bee Limited. Now, this is very important. They didn’t say that it was YouMobi Co,. Limited, which is what PayPal gave as the owner of Gigicup.com. The review says that it was actually the other company that owned those other sites (SmartWayIn.com and FanMart.com).
This makes us think that the review is probably a real review and not something that was cobbled together by someone who just wanted Gigicup to have a bad review. Which means that Gigicup.com probably shouldn’t be trusted.

So, with all of this information that we found, and our review of Gigicup.com ending, what exactly do we think of Gigicup? Do we think it’s a scam?

We wouldn’t go so far as saying that it’s a scam. Maybe, just maybe, there really is a legit company out there called Micro Bee Limited, and they sell clothes, dresses, and swimwear. There is no evidence yet to suggest otherwise.

Having multiple email addresses and multiple sites just doesn’t make this site, and the others, too legit in our mind. We won’t go so far as to say that they are a scam, but we personally wouldn’t recommend using them, nor trust them without further proof.

Whether or not Gigicup is a scam really isn’t the issue. The issue is that many times, sites aren’t what they claim to be.

In the online world, there are many ‘bad actors’ and scammers who want to take your money from you. Which is why we’re here to help.

We’ve created a video course on how to detect an online scam. We share our own methods on how to spot a scam, all without having to order something from the actual site.

We’re also pleased to offer our course for 50% off. If you have been scammed, or are worried about being scammed in the future, we would highly recommend that you check out our course today!

What about you? Have you used Gigicup.com and did you purchase something? Did you receive it? Do you have other information about Gigicup? We would really love to hear about it. Don’t hesitate to leave a comment below and share it with us!

138 thoughts on “Gigicup.com Review: Is Gigicup A Scam, Or Is It Recommended?”