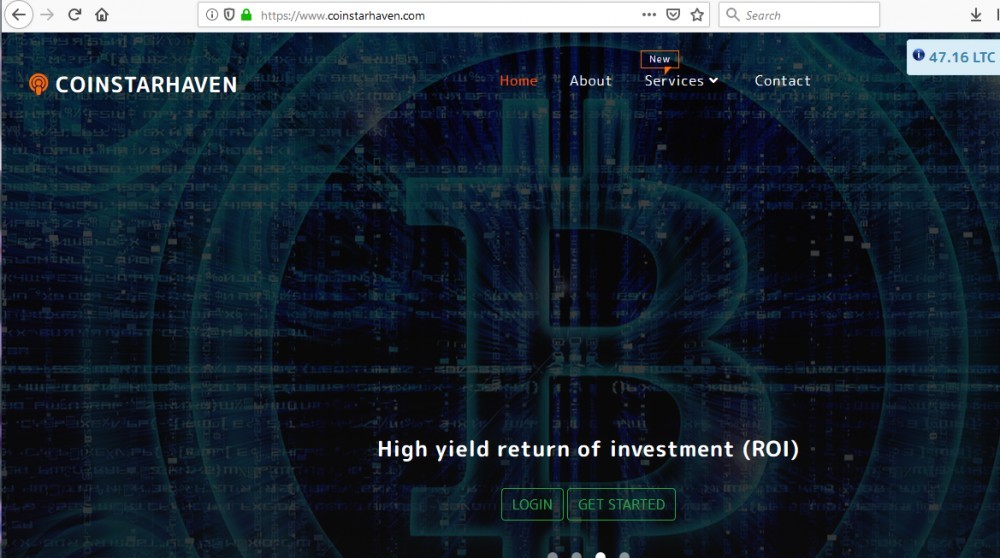 Through our contact form, we received a question regarding CoinStarHaven, and because of it, we added it into our query of things to write about. We’ve since had several others comment on its authenticity as well. 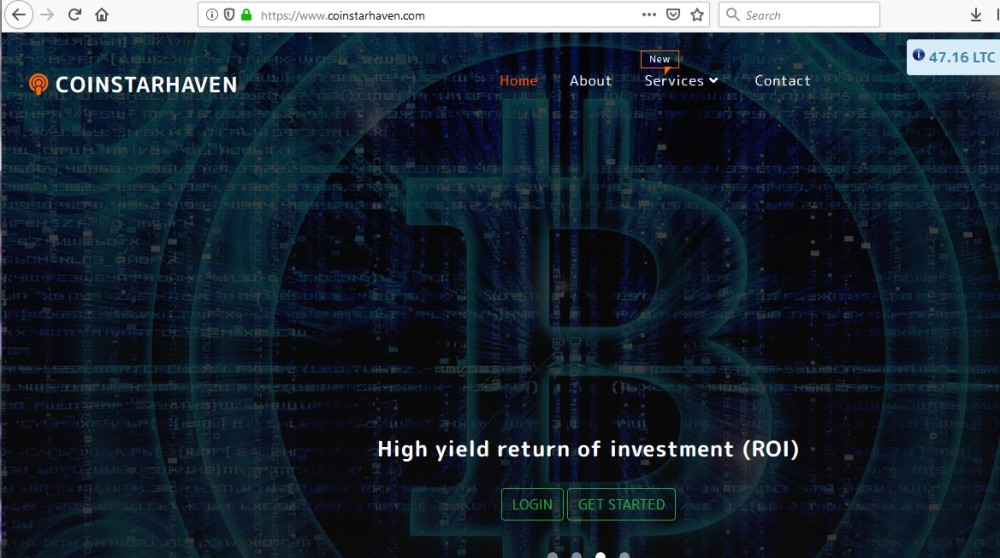 CoinStarHaven.com is a Cryptocurrency investment company. Or at least, that’s what they say they are. They claim to have experts in this field who have been able to invest over 40 million in the last two years, all with favorable returns.

The thing that grabs most people’s attention is that they claim they can double your money within 7 days. And this is where people should start to question how CoinStarHaven.com works, and what they offer.

Don’t get us wrong; we’re not saying that you can’t double your investments within 7 days. If you search around for testimonials, we’re sure you could find people who have done that (although they may be few and far in between).

But what we are saying is that if someone guarantees that your investment will double, then you really should start to question the authenticity of the website. There is always risk with investing something, and you can never be completely certain you’ll actually make money with investments.

A good rule of thumb to follow is that if someone claims something will happen, like, for example, their services are 100% risk-free, then it’s probably something that you should steer clear from.

How Is The Money Invested?

Of course, we can’t just immediately call CoinStarHaven.com a scam when we haven’t really looked into anything. So we decided to check out how exactly they are investing the money, and how that whole process works.

We were a little dissatisfied on CoinStarHaven’s explanation of how they invest their money. We were hoping for a rather lengthy explanation, detailing as much of the finer points of investment, trading, etc, so that we could verify that it works. Unfortunately, we only found the following:

As you can see from the screenshot above, they claim that they use a ‘high-frequency custom trading algorithm’ to double your money.

Now, we don’t know about you, but we don’t exactly trust an answer like that. It’s not that there aren’t trading algorithms out there that can do something like that, but we’ve looked into too many scam websites that say something similar, and they never go on to explain anything else.

How does this algorithm work? What models are used for it to function the way it does? What else can they tell us about this process?

Also, they claim that their algorithm ‘systematically trades thousands of bitcoins per minute’. We did a quick look at the average time it takes to trade and transfer bitcoins. While the most common answer is one hour, we did find an answer that suggested it could happen in 10 minutes.

Are The Owners Even Real?

If you go to CoinStarHaven.com’s About page, you’ll find that they show the owners and who they are. But when we investigated a little further, we questioned whether the founders were really legit. 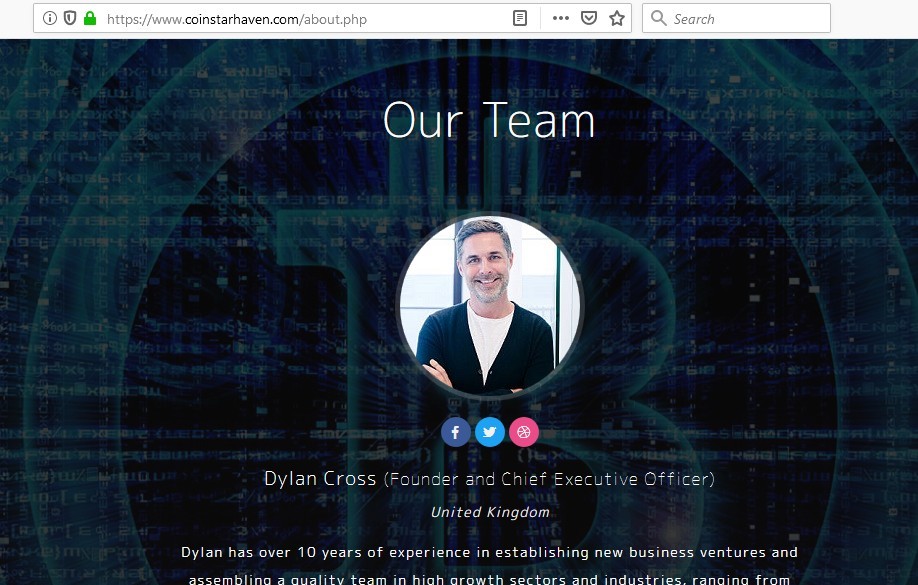 Dylan Cross claims to have been around for 10 years as an entrepreneur, starting new business ventures. But when we searched around for him, there isn’t very much we can find about him.

On top of that, we found his name in connection to another site – http://hexacoinchain.com. That site is very similar to CoinStarHaven.com, and almost has almost exact word-for-word pages as CoinStarHaven.

We decided to check out his photo, and see if, through the use of Google Images, we could find him other places. While we didn’t find him specifically, we did find his image all over the internet. 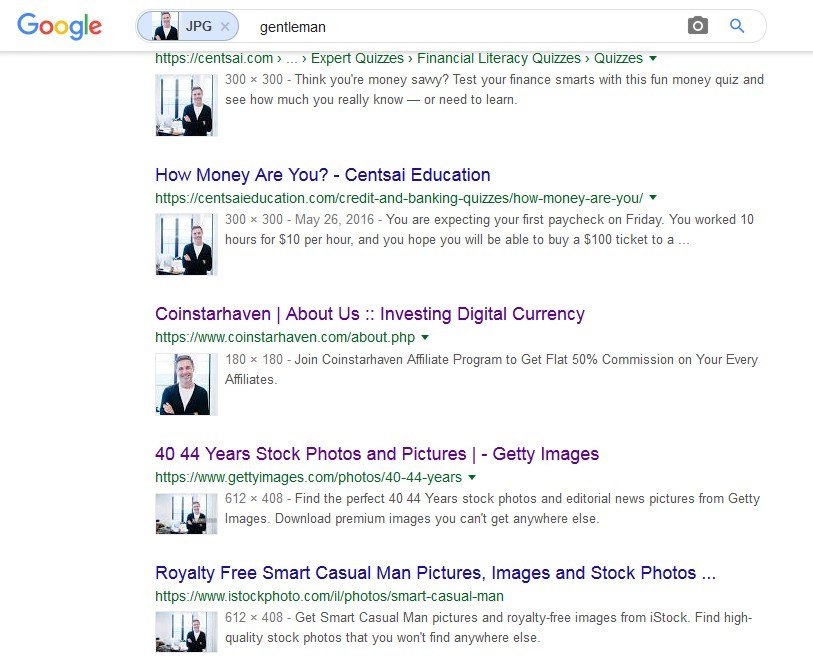 What’s interesting is that this photo is found on GettyImages, as well as IStockPhoto. For those that don’t know, those two sites are popular places to find free and paid images to use. That’s right, it looks like Dylan Cross’s profile image is actually a fake photo!

Now, maybe Dylan Cross likes his privacy or something, and so he decided to use a different photo of himself. If that is so, our next question would be, how they explain their fake testimonial reviews?

Testimonials Are Faked Too?

Two of the three testimonials on their home page were of people that we were able to find other places on the internet. But what’s interesting is the testimonial of Calvin Fitzgerald: 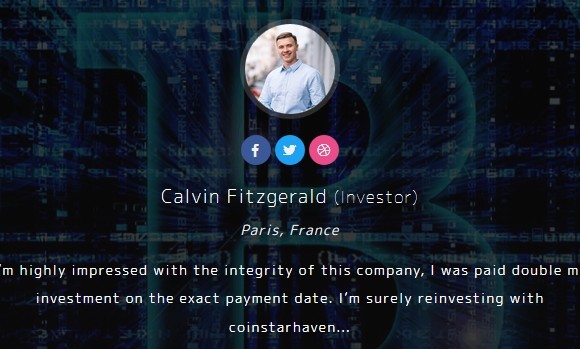 He seems likes a nice guy, especially since he shares the name Calvin with the owner of We Get Scammed For You, Andy Calvin. But, nice-looking guys aren’t always what they appear (or the people behind them either).

If we were to stroll to another site, https://gbs-agency.com/en/, we would find the same exact person leaving feedback on their site. Only this time, his name is Roman Kudryavtsev:

So who is it? Roman or Calvin? We don’t know, and we doubt both are legit. Probably, both sites pulled the same image off the same website, and used it for a fake testimonial (which is sadly common now-a-days).

But that’s not all about Calvin Fitzgerald. As we were looking around for CoinStarHaven on the internet, we stumbled across their Instagram page, and found something even more bizarre! 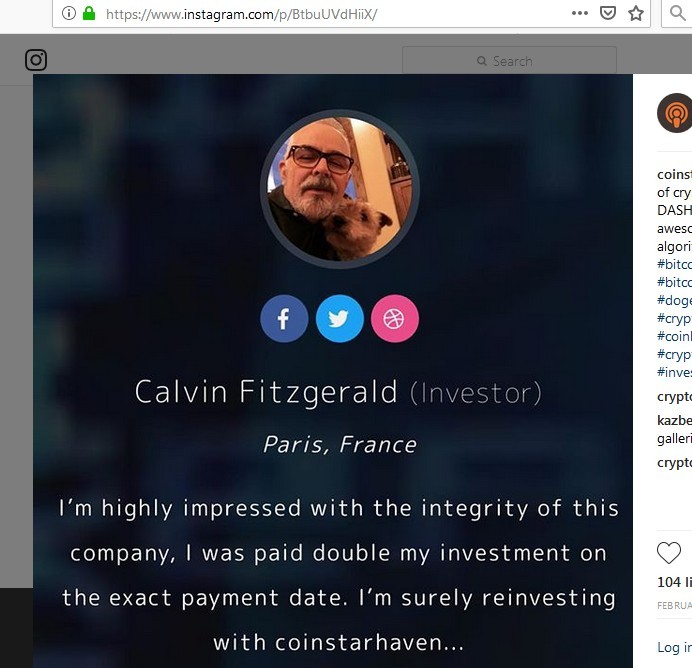 If you go to CoinStarHaven’s most recent post on Instagram (which was back in February), you’ll notice that it was a post about a testimonial. And it’s from Calvin Fitzgerald.

But why is his photo different? On the website, you have a young, clean-shaven guy. In the Instagram photo, you’ve got an older bearded-ish guy (who’s also wearing glasses and has a dog). Both have the same exact name, and give the exact same testimonial.

And it’s highly doubtful that this is a coincidence. You don’t have two people leaving the same exact review with the same exact name with different photos, unless it’s intentional. So, clearly, something is going on that we don’t know about.

From the people we’ve talked to on our website, who have submitted comments or something through our contact form, according to them, this site is a scam.

As we looked into it, there really wasn’t anything that confirmed to us that this was a legit program. They don’t really tell you in detail how exactly they are going to invest your money, nor how the algorithm actually works.

They also guarantee that you’ll double your money – which is something that can never be completely certain when dealing with investments. Additionally, they are using images that can be found on other websites (meaning they’re faked), and they’re using multiple photos for the same testimonial!

All in all, we wouldn’t recommend that you invest with CoinStarHaven. They haven’t really displayed anything that suggested that they are an authentic site. And because if this, we personally wouldn’t trust them.

Check out the course today!

Have you invested In CoinStarHaven? Did you received your payout, or did something go wrong? We would love to know your thoughts about CoinStarHaven.com in the comments section below! Thanks also to Peter for sending this to site to us through our contact form!

4 thoughts on “CoinStarHaven.com Review: Is CoinStarHaven A Scam, Or Can You Really Double Your Money In 7 days?”