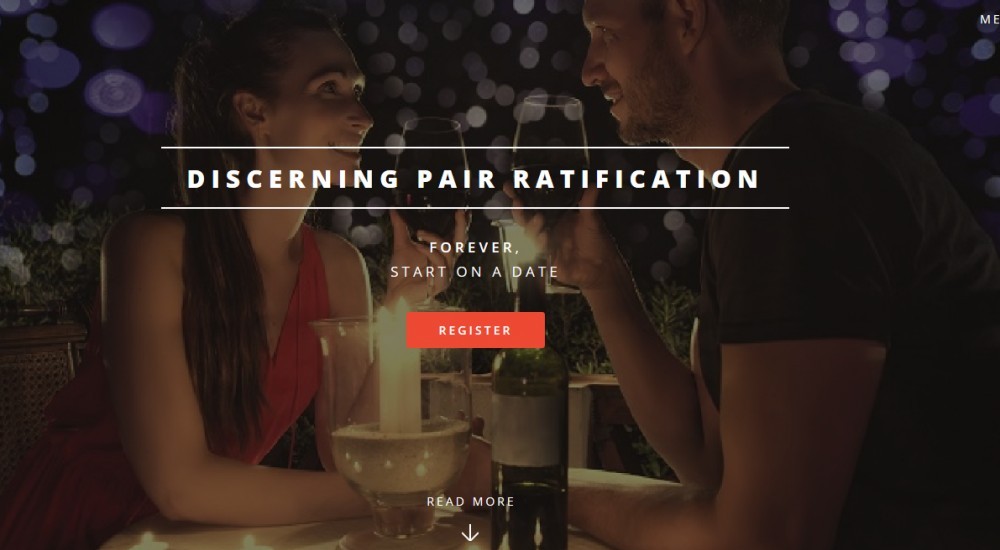 Two different people have come to us with two different MakeAnAccount.com URLS. Both we thought were fraudulent. And hopefully, by the end of this article, you will think so to.

Most people will find themselves get asked to go to this place when they’re on certain dating apps. Either the person wants them to get this site before they go out with them, or the person just want you to join because they are afraid of violence. Most of these sites appear through Tinder, though our guess is it could be happening many other places.

We’re not exactly sure what the actual site is, or who owns it. But what typically happens is that someone will get a URL sent to them, with the end something like /FREEmember/41e.html.

The owners of MakeAnAccount.com seem to continually create pages about some “Discerning Pair Ratification” success, and give a few ‘stories’, to help prove their point.

But, when we take a closer at things, at certain images, as well as how everything works, we come to find that this site is all put out just to try to entice you into revealing your Credit Card info.

What Is Shown In The Footer?

As you can see from the screenshot above, MakeAnAccount.com claims to have social media accounts. Or at least they have buttons that should lead to those accounts.

We checked each and every one of those buttons, and none of them lead anywhere (which is typical for a scam website). Not only that, but as we looked down for the typical pages found below, we didn’t find any!

You will usually find a Privacy Policy or Terms of Service somewhere in the footer. Those pages help you get a good idea about what the site is, how you are able to use it, and what type of information they’re going to collect when you use their site.

Because they don’t have any of those, we really don’t know what they will do – they could very well take your Credit Card information, and sell it, use it, or otherwise abuse it.

If you take a look at the above screenshot as well, you’ll notice that they have a copyright notice of 2018, instead of 2019. This isn’t overly a big deal, but, more than likely, they haven’t actually updated the site since that year, and are just copying this page, and pasting it into another page.

And while all this is evidence that might help sway us towards the site being a scam, it doesn’t fully convince us. So we decided to keep digging, and look into the Testimonials.

The Power Of Faked Testimonials

Sadly, for those who used this site, and believed the testimonials, we are here to tell you that they were faked. And we’ll prove it to you.

Judy and Reed. It sounds like a nice story about them meeting on this site, and finally getting married about a year ago. But, interestingly enough, if we do a quick image search of their beautiful photo, we find them on YouTube, with different names.

If you look up at the top right corner of the screenshot, you’ll see the real photo of those two people (who are supposedly called Judy and Reed).

If you take a look at the lower left-hand corner of the screenshot, you’ll find that their real names are called Jas and Sim. Not only that, but they joined YouTube in 2016, which probably means they were married long before April 2018 (as said on the faked testimonial).

And they aren’t the only faked testimonial.

Enter Liz and Chris. Two lovely people who were so into it that during their third date they got tattoos together. Doesn’t that sound like a romantic night out? (Well, okay, to us, it doesn’t, but hey, we guess that’s just how some people like it).

As they note on their (*cough* fake *cough*) testimonial, they say they owe it all to Discerning Pair Ratification (MakeAnAccount’s site). But do they owe their love, or the drone incident that involved the real people in the photo?

As you can see from the screenshot above, the real people are actually Elaine and Paul. Back in early 2018, they were detained for an unfortunate mishap when an airport mistook them for operating a drone, and thinking they were doing something, well, illegal.

So these people aren’t actually Liz and Chris, but two people who can be found within several online news sources.

As we can see above, the testimonials are clearly faked, and are just put out there to deceive people into believing that this site is legitimate. But, as you can also see, if you do some careful research beforehand, you can save yourself a load of annoyance later on down the road.

As you can see in the screenshot above, it says that it’s a free verification process to make sure that you are a bad person (or so our guess is).

So, we decided to fill it out, and see where it led us. After we filled out our information, they asked for our credit card information. But if it’s free, why do they need our info?

We didn’t know, but thought that, well, they obviously haven’t led us in any wrong direction yet, right? So we grabbed some fake credit card information, and punched it into their form. We received another little notice:

The transaction was declined? What were we trying to purchase?

As you’ll notice above, it says that ‘the page at RocketFriend(.)com says…’. We took a quick look at RocketFriend, and found that it appears to be another dating site, one that is geared towards adult-type things, quick hookups, and even one-night stands.

Our best guess is that MakeAnAccount was trying to get us to order from RocketFriend (and every person they got, they received a small commission, assuming they didn’t own RocketFriend outright).

We don’t know, but after we received the notice, we decided that MakeAnAccount.com wasn’t a site that seem too legit.

The thing with MakeAnAccount.com is that we can’t tell if the entire site is a scam, or only the pages that they create. But, what we do know is that the links that people receive are definitely not something that you want to be using.

Two reviews come from Scamadviser, telling about how they got scammed by this site, and how they wouldn’t recommend it. If you have a chance, make sure to read the reviews.

In any case, we wouldn’t recommend that you use MakeAnAccount.com, nor, for that matter, any other site that someone shares with you on a dating site. 9 times out of 10, that site will be fraudulent.

Dating scams are never going to end. As long as there are dating sites, there will be dating scams. However, there are ways to prevent yourself from falling for those scams.

Over the past few months we were able to create a course on how to detect an online scam. And we’re pleased to say that we’re able to finally release it!

Not only that, but we’re happy to give this to you for 50% off. Through the course, you’ll learn the exact method that we use on how to check if a website really is a scam.

Check out our course today!

37 thoughts on “Makeanaccount.com Review: Is Make An Account A Scam?”