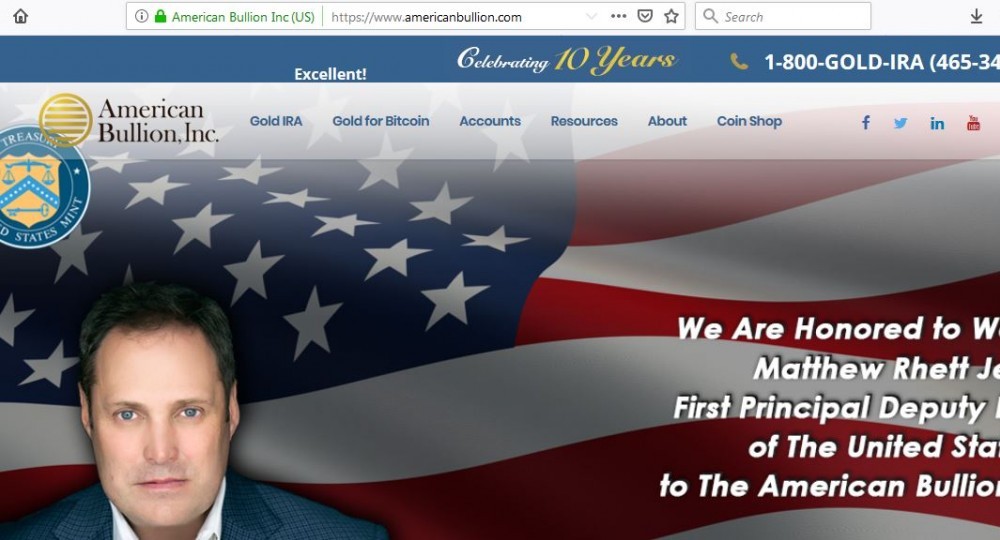 Due to a recent rise of investment scams, we decided to find sites that had something to do with investment, but were legit. Naturally, American Bullion came to our attention, and so we decided to take a more in depth look into their site.

Interestingly enough, while we did find them to be legit, and not entirely a scam, we did find a few things that didn’t make us very happy, in terms of American Bullion’s authenticity.
Is American Bullion a scam? That’s just what we’re hoping to get to the bottom of. Hopefully, by the end of this article, you’ll be able to make your own informed decision on that exact question.

A Display Of American Bullion’s Legitimacy

American Bullion is a site that has been around for over 10 years. They “specialize in converting your existing IRA, former 401(k), or other qualified retirement plan to gold or other precious metals.” And they seem to have plenty of reviews to prove what they do is of value.

On their site, they list numerous reasons why you should trust them, and why they are legit.
For example, they show several people, several well-known people we should add, who endorse American Bullion. Names include Laura Ingraham, Hugh Hewitt, and Mike Gallagher.

Not only that, but even American Bullion being around for 10 years shows that this site has some sort of legitimacy in the realm of IRA investments, as well as buying precious metals.
Oftentimes, scammers, especially ones that we look into, will set up a website for a few months, or at most a year or so, and then move onto another website after that time has passed.

But with American Bullion being around for over 10 years, there is going to be little doubt that this site is actually scamming you out of your money. The only way they would be is if we could find a lot of negative reviews about them (which we can’t).

On top of all this, their site also has a Risk Disclosure:

Now, many of the readers may not think that this is anything to speak about. But for us, well, we’ve seen too many scam websites that have popped up without any type of Risk Disclosure.

Most of those sites were ones that claimed to have higher return guarantees. Sites that don’t have some sort of risk disclosure or disclaimer are usually fraudulent websites.

So, with American Bullion being over 10 years old, being endorsed by some well-known people, and having a disclosure of possible risk involved, they definitely come across as being a company that would be worth doing business with.

The BBB (Better Business Bureau) is a corporation that helps show consumers more information about other company’s authority and legitimacy. They do this by showing reviews of other consumers, and giving these companies an accreditation based on several criteria.

When you go to BBB’s website (BBB.org) and search for American Bullion, you’ll find that American Bullion is BBB accredited, which gives American Bullion a lot more credence for their site. Additionally, they are giving an “A+” rating, the highest rating you can receive from BBB.

As with most cases, there are several complaints against American Bullion that the BBB show for others to read about. But, as is typical with most legit businesses, each one is answered by the company:

Nothing is wrong with complaints, or negativity. In fact, we would encourage it – if it is constructive. Complaints help show a company’s true motives fairly well.

Many times, people will complain, and the certain company being complained against doesn’t answer the complaints and chooses to ignore them. If this happened, it shows a poor customer service on the company’s side, as well as possibly appearing to be ‘scammy’. Many-times, scammers won’t answer complaints, because they know that the complaints are indeed true.

But once again, the complaints, and the answers, all help verify that American Bullion is indeed legit. They’re not trying to scam anyone out of their money, nor intentionally trying to be fraudulent.

TrustPilot gives Ameriacn Bullion a 5 out of 5 star rating, which seems to be termed ‘Excellent’. With over 180 reviews, and the majority of them 5 stars, TrustPilot confirms (once again) that American Bullion is a company that knows what it’s doing in terms of IRA investments and moving your money into precious metals.

Now, it does need to be said that TrustPilot can at times be not completely correct in their assessment. Recently, it came out that there were ‘bad actors’ who were creating a lot of positive reviews for themselves on TrustPilot and making themselves look more authentic than they really were.

There isn’t much plausibility that American Bullion is doing this, but one can never be certain in this day and age. From what we look at though, the reviews did appear to be authentic and true.

Now, let’s get some things straight first – we believe that American Bullion is legit. From what we’ve seen above, they appear to be trying their best to portray themselves as an authentic and proper business that deals with investments.

However, as we were looking a little more closely at their site, we found a few things that made us have to think twice about American Bullion.

If we had to base our review only on what we discuss below, we would actually call American Bullion a scam – which is a little strange, because of all that we’ve written about above.

As you will notice in the screenshot above, you’ll find that the copyright notice is for 2018, and not 2019 (which is the year we are currently in).

Now, nothing is overly wrong with having a copyright notice off by a year or two. But, unfortunately, many scam websites will have copyright notices that aren’t updated. This happens because the scammer will start a site at the end of a year, and run it for a year or so – but never update anything on their site.

So American Bullion can come across as scammy-looking due to this. You would think that a well-known business like American Bullion would change this, or have something that automatically updates. But, well maybe it’s just not in their budget?

Unfortunately, taking a look at American Bullion’s social media accounts shows something similar to what was described above. They seem to have posted a long while ago, but don’t do it as frequently as we would like a company to do:For example, if we were to take a look at the screenshot above, we would notice that the last tweet they sent via their Twitter page was nearly a year and a half ago!

We personally like social media accounts to tweet/post every week. At least once a month wouldn’t be too bad. But when a company doesn’t do anything for over a year, then there can be cause for worry.
While Facebook is similar to Twitter, in regard to their inconsistent posting, YouTube does reveal that American Bullion did post a video a few weeks ago:

As of writing this, it has been three weeks since they posted their last video. However, their second to last video was posted two years ago – and their third-to-last video was three years.

So, all in all, if we were to just take a look at their social media accounts, and base what we think off of them by that information, we would have to conclude that they don’t appear to be legit as we would like them to be – which would be a determining factor in our rating of them.

But, this isn’t the only thing that appears to make American Bullion less legit-looking.

Is American Bullion Faking Their Testimonials?

We always love reading through reviews and testimonials, especially when they are right on the site. The reason we like this is because, often-times, scammers will use fake testimonials to try to make themselves more authentic and legit.
We never thought that American Bullion would be faking their testimonials, but when we searched around, we found that they were faking part of it!

Now, let’s be clear – we don’t think that the actual testimonial is faked. What we do know is that the image for the testimonial is actually not the real person who left the review.

How do we know that?

There are sites out there that give away photos and/or sells images. Many other sites take images from these sites, and put them on their own website to help illustrate points or make their content more visual.

As we searched around the internet, we found that Daniel, who can be seen on the left in the above screenshot, was found on another site. One that had to do with DWI charges:

Not only that, but when we searched around for Paul, we found him (in a different photo) on a site that has royalty free photos!

Of course, maybe Paul and Daniel like to have their images all around the internet, right? Maybe their day-job is to be models or something (which could be entirely possible, though not very plausible).

If that is the case, then why can we find the other testimonial profile images on the internet as well?You’ll notice in the screenshot above we have another two testimonials. One from Susan, and another from Holly. Let’s look at Susan first.

Susan appears on numerous websites, and we were able to find her on another site that sells and gives away images:

This specific image of Susan was uploaded by an author named “marilook_rus”. Our best guess is that the name of this woman could be Mari, and is from Russia, though we can’t really confirm that.
But, neither can we confirm that her name is actually Susan, which probably means that this person didn’t leave the testimonial on American Bullion.

Now, moving on to Holly.

Holly’s story is a little different. You see, after we searched for Holly’s image, we came to find who exactly Holly’s real name was (who the person in the image was). And her name is actually Sheryl Sandberg – the Chief Operating Officer of Facebook. As you can see from the above screenshot, Holly’s image can be found on the New York Times, a popular and well-known news organization. In the article, you come to find out that this supposed Holly is actually called Sherly Sandberg, and part of Facebook’s company.

If we found this on any other website, we would immediately discredit them because of what we uncovered. You don’t take someone else’s image, stick it on your own site, and proclaim that it’s someone completely different! That just doesn’t make your business look legit at all.

Is American Bullion A Scam?

If we had to say whether this site was a scam or not, we would say that it is definitely not a scam. Our initial findings in this article helped show that. Doing some other searching found that most of the testimonials can be found on the site from all the way back to 2011. Which means the testimonials themselves aren’t faked.

Our guess is that back in 2017-2018, American Bullion hired some company to come through and redesign their site – and that company added the images, which is getting more and more typical now-a-days.

So, over all, we would recommend American Bullion. We don’t exactly like that they are using fake testimonial images (even if it’s for the sake of protecting the reviewer’s anonymity), and neither do we like their social accounts not being updated. But, putting those issues to the wayside, American Bullion does show itself to be an authentic and legit company.