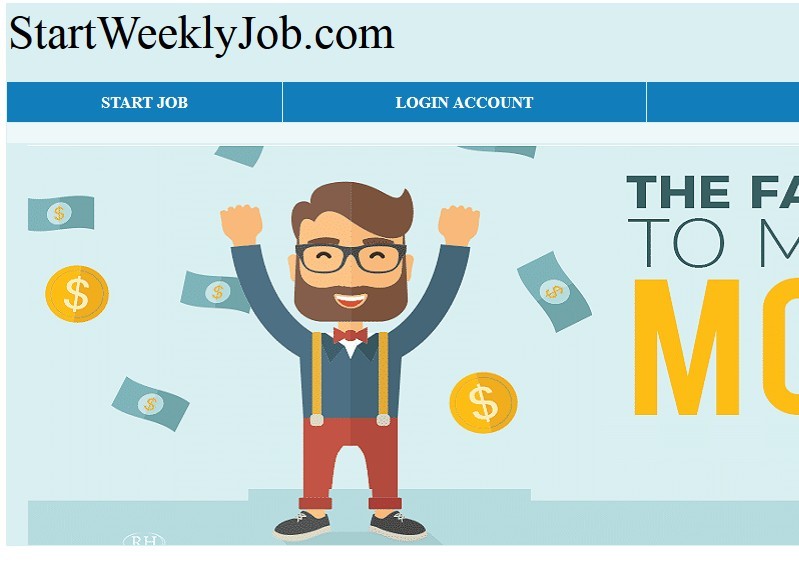 We’ve written quite a bit on these scams lately, and Start Weekly Job is no different. Not only do they have the same exact sales page as these 40 different websites, but they also have the same false claims that you can make money.

Is Start Weekly Job a scam? The site clearly gives itself that way. Bold claims about a lot of success with very little time rarely work. But we’re getting ahead of ourselves. Follow us as we take a look at Start Weekly Job, and just what we think of the site.

Description: A site that claims that you can make money, in a relatively short amount of time, all by just having people click through your referral link.

It’s interesting to note that our site has found about 40 sites that look exactly like Start Weekly Job. They are all the same, they just have a different URL.

Of course, just because all the other sites are scams, doesn’t mean that this one is, right?

SWJ’s Flaws And Lack Of Reasoning

StartWeeklyJob starts out like all the rest – poor grammar, and a lack of the English language.

StartWeeklyJob.com – We have been around since years and have over thousands members worldwide. There are no fees to join, and we send out thousands of dollars in payments to our members every month.

Since years? Thousands Members? We wonder if they would do well to hire an English writer to their site. Or at least one, that understand basic rules of speech.

But it’s in this first paragraph that we find StartWeeklyJob’s first false information, and ultimately, the beginning of their scamming schemes.

How long has StartWeeklyJob been around?

StartWeeklyJob claims that they’ve been around ‘since years’, or several years, to put it in a more grammatically correct answer. If you take a look at their site’s Copyright Notice, you’ll find that they claim to have been in business from 2018-2019.

Of course with this article being published very early in 2019, it doesn’t seem likely that StartWeeklyJob has been around for several years. In fact, they haven’t even been around for an entire year!

Every site that exists online needs to be registered at some point, so that everyone knows that a certain site’s domain is taken already (so people know they can’t buy the domain if they had wanted to).

When you buy a domain, the registration process, and creation of the domain, is all in public records. So you can see when exactly a site was created. And usually (though not always), a ‘business’ will be around only as long as their site has been around.

So when exactly was StartWeeklyJob’s site created? October 7th, 2018.

As you can see from the screenshot above, I’ve highlighted two lines that show when StartWeeklyJob was created, and when it was updated last.

Basically what the screenshot is showing you is that StartWeeklyJob has only been for around 5 months, and not several years, as their site claims.

What does this mean for StartWeeklyJob? Well, it means that they’re definitely onto a bad start with our review. If you lie about one thing, why should we believe anything else they claim on their site?

If in the very first sentence they inaccurately say something, what’s stopping them from saying other things inaccurately – like the little amount of work that they claim you need, or that you’ll actually get paid?

But this isn’t the only place where we find inaccuracies.

In StartWeeklyJob’s FAQ section, they quickly tell you how they have a good anti-cheat system, and if you send any fake traffic to the site, they’ll find out about it, and then ban your account:

Please note that we have a strong anti-cheat system, so do not bother sending fake traffic. You will get credited about it, but eventually you will not get paid and your account will get banned. Only send real people from real pages.

Is this really the case?

We decided to test it out. Of course, there are many ways to get fake traffic, but due to the limited funds we had, we decided to send fake traffic ourselves, and not buy it (which you can actually do). We wrote a quick script that randomized our IP address (basically where it showed we were coming from), so that StartWeeklyJob was thinking it was getting unique traffic.

Did we get banned? Not yet. From what we’ve gathered about the site, there doesn’t seem to be any anti-cheat system, or a pretty weak one, which means that StartWeeklyJob is lying to us again.

Can you get paid from StartWeeklyJob?

We’ve shown you two places where StartWeeklyJob is lying to you, and you still are interested in whether you can get paid?

Need proof? The above screenshot should be enough. Yup, that’s right, we made $655 dollars, and haven’t seen a cent of it (not that we really were expecting to receive any of it).

They claim that you need to fill out a pay out form, but when you finally get to the place where the form is supposed to be, there is a message that says the file can’t be found! 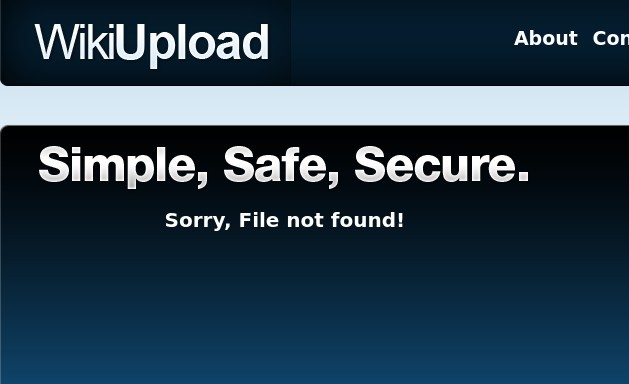 So even if you believe StartWeeklyJobs claims about making money, with very little work, you can clearly see from our experience that there is no way you’ll get any of that money.

In fact, we have yet to find anyone who has actually gotten paid from StartWeeklyJob or any of their exact-look-alike sites. So we’re not the only ones who didn’t get paid out.

Is Start Weekly Job A Scam?

Yes, by all means, this site, start weekly job, is a scam. They won’t pay you out, even if you do make money for them.

Of course, everything they said on their site wasn’t completely untrue. They did say that you could make a lot of money in a little amount of time. That is true.

Unfortunately, they just forgot to mention that you won’t be able to receive any of that money that you made. You can make a lot of money, you just can’t get your hands on it.

This site is your typical get-rich-quick scheme. Don’t be fooled by bold claims about making a lot of money in a short amount of time – because 99% of the time they don’t work.

But sites do exist that will help make you money online. And we have one that we recommend, as it works about 99% of the time.

We did a review of them, which you can check out here. They have a free start membership, where they’ll give you two free websites, access to one of the best keyword researching tools, and training that teaches you affiliate marketing quickly and effectively.

So what are you waiting for? Check out Wealthy Affiliate today!

6 thoughts on “Is StartWeeklyJob A Scam? Or Can You Actually Make Money?”