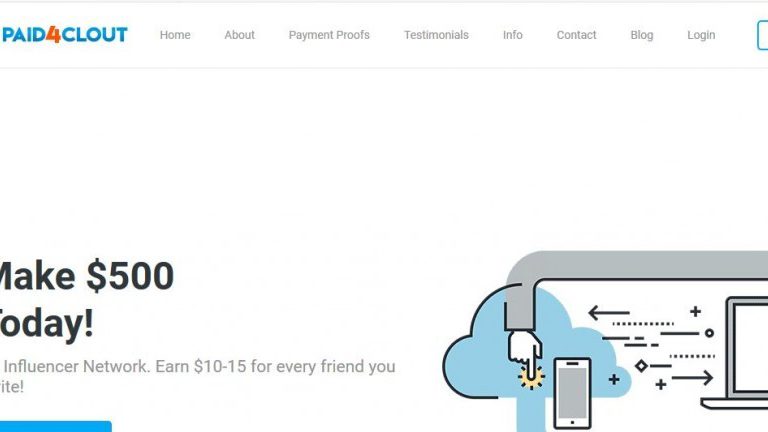 Paid4Clout is a site that we’ve actually seen before, just with a different name, and different layout. Formally, it was called CloutPay.co. Doing a quick look online would help you show that CloutPay.co is indeed a scam.

But, in this review we’ll be looking at Paid4Clout, and specifically how they are a scam. From the bold claims and fake testimonials to their unrealistic get-rich-quick sayings – all this and more is what we’ll check out. So come along with us as we check just how legit Paid4Clout is!

Take A Look At Wealthy Affiliate

Paid4Clout is a scam, but that doesn’t mean you can’t make money online. Check out Wealthy Affiliate, a legit site that teaches you for free how to make money.

Paid4Clout is a site that claims you can make a lot of money, in a short amount of time. Like any get-rich-quick scheme, Paid4Clout tells you that if you get enough people to their site, you’ll make a ton of money.

They claim on their site that you’ll earn anywhere from $10-$15 dollars per person you invite. Which means that if you just invite 10 friends, you’ll make $100 dollars.

Of course, those of us at We Get Scammed For You have seen these types of scams before. They draw you in with their claims of making some quick money, and the scam begins to happen.

Don’t believe us that this will happen? Make sure to check out are articles on Kids Earn Cash, My Work For Life, and Earn Shot.

All three above are sites that are carrying a very similar scam as Paid4Clout.

But, let’s get into the meat and bones of this scam, and show you just how deceptive it truly is!

If you go to Paid4Clout’s About Us page, you’ll find that they claim they were ‘founded in 2015’. However, anyone with enough knowledge of being able to check when a site was actually created would know that this isn’t true.

The actual site, Paid4Clout.com, is not yet even a month old (as of writing this). So, clearly, right from their About Us page, Paid4Clout is lying about how old their company really is.

Now, how do we know all this?

When a website is created, they have to go through a process to actually be created. When this process happens, it goes on public records when a site was created. All one needs to do is go to a public records database, look up a site, and find exactly when everything was created.

As you can see in the above image, Paid4Clout has only been around since the 12th of July. Clearly, they aren’t even anywhere close to being a company that was started in 2015.

Their Testimonials Are Faked!

We never like when we find fake testimonials, and, sadly, Paid4Clout is doing just that. Because the site is fake, it makes sense that Paid4Clout would have to find a way to make themselves look more authentic and legit. And so, they decided to use fake testimonials.

If you take a look at the image below, you’ll notice that it’s a screenshot of one of Paid4Clout’s users who claims to have made over 10K dollars, in a very short amount of time:

It’s interesting that Ambria would choose that exact image to use as a profile image. Because, when we did a reverse image search on that specific image, we found that someone with that exact image left a comment on another site over 2 years ago. And they left the comment with a different name…

What does this all mean?

Simply put, this image, and others on the site, are more than likely stock photo images. There are many sites that are out there that have a large collection of free and paid images that you can use if you choose to.

Because Paid4Clout is using these images, you can’t easily trust the reviews, as you can’t tell if they really are true. It’s highly probable that they actually just faked the testimonials.

As you can see from the above screenshot, Paid4Clout has a video testimonial from a guy named Scott. That’s Scott above. He claims to have been working for Cloutpay for about 3 months, and it’s the only income that he makes, or so he says.

But, is this really true?

Well, videos can be deceiving. And what’s even more deceiving is that this person named Scott probably doesn’t even know anything about CloutPay.

You see, there is a site called Fiverr, where you can find people who will give you a video testimonial for a certain amount of money.

And yes, Scott, or whatever this guy’s name is, works on Fiverr.

More than likely, his name isn’t Scott. And as you can see from both images, it’s the same exact guy in the same exact room. So, clearly, Paid4Clout paid this person to say what they wanted him to.

All in all, this video testimonial, along with the others, aren’t reliable and shouldn’t be taken as proof that Paid4Clout is reliable.

We don’t even need to make an account to know that Paid4Clout is indeed a scam! No one pays you $10 dollars to get someone to their site. And even if it were true, you’re definitely not going to be able to do it on this site.

They don’t tell the truth on their About Us page, on their text testimonials, and even their video testimonials! If their lying about all those things, then why would believe that they are actually going to pay you large amounts of money for getting people to their site?

All in all, we would highly recommend to everyone not to trust Clout4Pay, or do anything on their site. More than likely their selling or using the info you provide to them. It’s best to find a much better system that actually works to make money.

Check Out Our #1 Recommend Way To Make Money!

If you want to make money from home, be your own boss, and learn to earn online, then we would recommend you check out Wealthy Affiliate. They are a reliable company that will teach you how to make money online.

Wealthy Affiliate teaches you how to make money through the use of affiliate marketing. Basically, you find things that you love, or enjoy, promote them on a site (that Wealthy Affiliate will help you create!) and earn money when you get people to buy those products your promoting.

5 thoughts on “Paid4Clout.com review: Is Paid4Clout a scam? (Yes, and Here’s Why)”