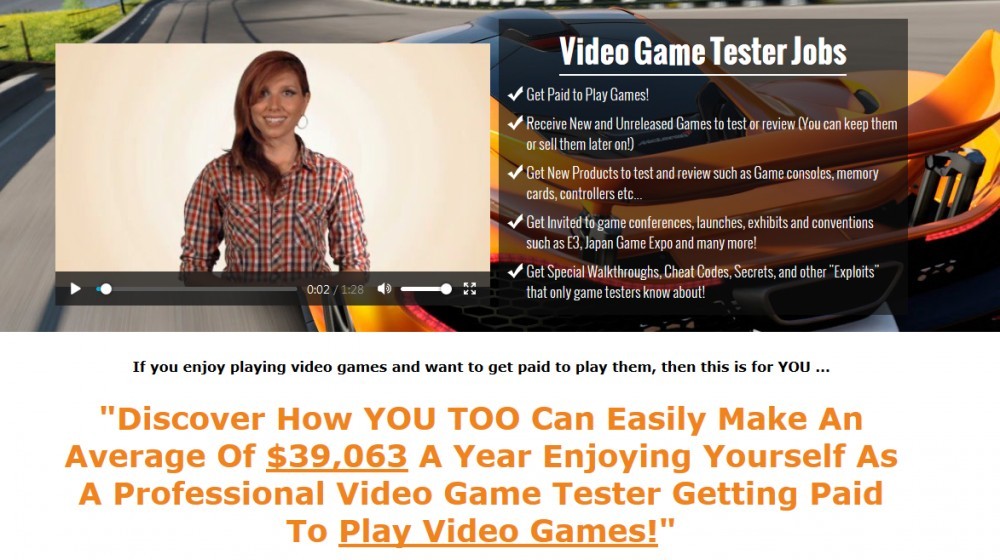 But continue reading to learn more about the site itself, why we think Gaming Jobs Online isn’t worth it, and how looking into a site’s content can help you clearly see what is really going on behind all the claims.

Description: A site that supposedly gives you access to companies that will pay you to beta-test their video and computer games.

GJO (Gaming Jobs Online) is a site that is rather like several others that we’ve reviewed before. Writing Jobs Online, and Photography Jobs Online, are two sites that have similar appearances, and one seems to be run by the same guy.

Both those sites were ones that weren’t to be recommended. But that doesn’t mean that we should throw GJO in the same boat immediately. Best thing to do is to see how the site looks before we make any recommendations.

Let’s Take A Look At The Site! 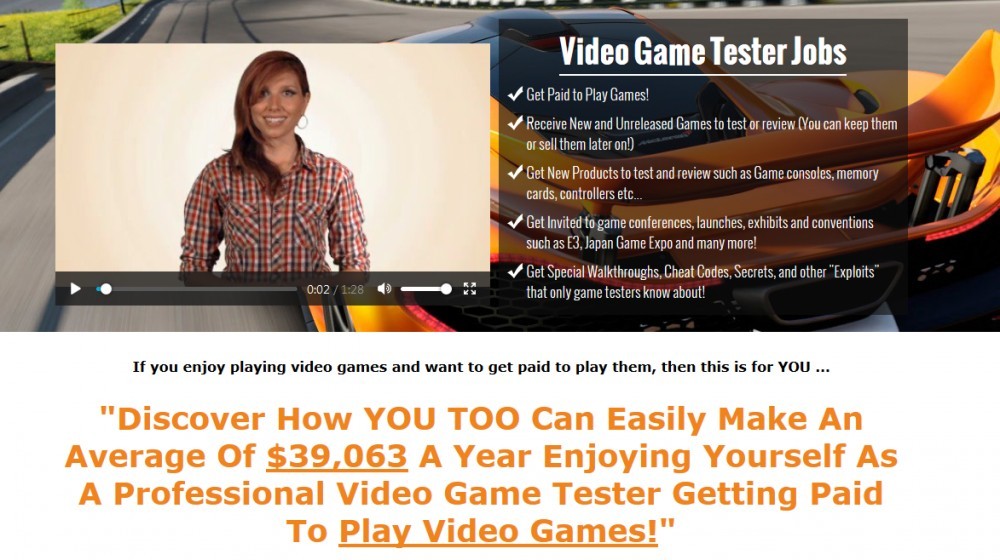 If you’ve read our articles about Writing Jobs Online and Photography Jobs Online, you’ll notice that the lady in the video is the same person on all three sites.

Nothing is wrong with that, it’s just that only two of the sites claim to be run by the same guy – Glen Anderson. Chris Page is the one that claims to be proprietor of Photography Jobs Online.

Why is the name Chris Page so significant?

It’s interesting that the name Chris Page is part of Photography Jobs Online. The reason is because the very first review is by a guy who calls himself that very name – Chris Page! 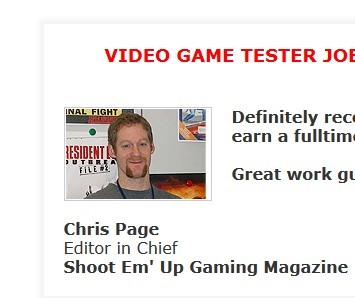 What’s interesting though is while searching online, I have yet to find a magazine called “Shoot Em’ Up Gaming”. So even with them being two different people, it’s hard to find both of them online.

Not only that, but as I was reviewing GJO’s site, I searched the image of Chris Page on Google, and found the same image on some Chinese site.

What was the image doing there, you ask? I don’t honestly know. I tried to use Google translate to see what was being said, but couldn’t quite make heads of tails of it.

What about the other testimonials?

I had some success with other sites showing that testimonials can be faked. Sometimes, if you upload the testimonial profile image to google, you can find other places it has been used.

Unfortunately (or is it fortunately?), when I looked at the other reviews, I wasn’t able to quite find where the first time the image appeared. But I was able to find the exact sales page on other sites.

There were probably 10 or so other sites that showed up with the same testimonials as the ones on GJO. Some were in English, and others were in other languages.

Nothing is wrong with finding the sales page on another site. It just means that other people promote this site, or that this site has multiple sites that promote the same product (all run by the same guy).

Searching high and low on GJO’s site, I found that they do have a blog. But it doesn’t seem to have been updated for a while now.

With it being (nearly) 2019, it’s been 4+ years since anything has been posted on GJO’s blog. And that’s not a particularly good sign.

If you find a website that doesn’t have fresh content on their blog, that usually means that the owner isn’t taking care of the site, and that he might have abandoned it altogether.

The owner seemed to be actively posting in 2012, but then only posted once since then (the one in 2014). More than likely, the person behind the blog isn’t that active anymore.

Is the site updated?

While the blog doesn’t seem to be updated, or managed, the site has been updated somewhat. At the end of their sales page, they show several games that they claim GJO users have worked on.

I’m no video game expert, but from my best searches, it looks like the majority of these came out in the fall of 2018. Which means that the site has had to be updated since 2014.

Unfortunately (once again), just because a site looks up to date, doesn’t mean that it is. As I was scrolling through GJO’s latest job page, I noticed that it needed something new.

When going to the Job’s page, the first thing you read is “Video Game Test Jobs” with the current date. So, for example, it’s December 31st, 2018 when I went to the site (as seen in the screenshot above).

But words can be deceiving.

You see, I’ve dabbled in some computer programming, and coding, and as I was looking at the source code of that specific page, I found a script that updated the text to the current date that is shown.

So if I browse to that same page tomorrow, it will show tomorrow’s date. I’ll spare you the script that I found, but what I won’t spare you is what I found out farther down in the source code:

In the screenshot above, you’ll notice that there is a date that is circled (or more precisely, ‘squared’) in red. That date is August 2017.

You see, as you read GJO’s job site, they have a wide variety of jobs listed. But when you look at the source code, it shows that those jobs were added over a year ago.

That seems to be right, since when I searched for the jobs, I wasn’t able to find anything online about them. The companies are legit, but the jobs are no longer available.

Does the site get any worse?

Well, I don’t know about getting worse or not, but I do know that their earnings-disclaimer helps clear up a few things. Below is part of the disclaimer:

ANY CLAIMS MADE OF ACTUAL EARNINGS OR EXAMPLES OF ACTUAL RESULTS ARE
NOT TYPICAL. YOUR LEVEL OF SUCCESS IN ATTAINING THE RESULTS CLAIMED IN
OUR MATERIALS DEPENDS ON THE TIME YOU DEVOTE TO THE PROGRAM, IDEAS AND
TECHNIQUES MENTIONED, YOUR FINANCES, KNOWLEDGE AND VARIOUS SKILLS. SINCE
THESE FACTORS DIFFER ACCORDING TO INDIVIDUALS, WE CANNOT GUARANTEE YOUR
SUCCESS OR INCOME LEVEL. NOR ARE WE RESPONSIBLE FOR ANY OF YOUR
ACTIONS.

MATERIALS IN OUR PRODUCT AND OUR WEBSITE MAY CONTAIN INFORMATION THAT
INCLUDES OR IS BASED UPON FORWARD-LOOKING STATEMENTS WITHIN THE MEANING
OF THE SECURITIES LITIGATION REFORM ACT OF 1995. FORWARD-LOOKING
STATEMENTS GIVE OUR EXPECTATIONS OR FORECASTS OF FUTURE EVENTS. YOU CAN
IDENTIFY THESE STATEMENTS BY THE FACT THAT THEY DO NOT RELATE STRICTLY
TO HISTORICAL OR CURRENT FACTS. THEY USE WORDS SUCH AS “ANTICIPATE,”
“ESTIMATE,” “EXPECT,” “PROJECT,” “INTEND,” “PLAN,” “BELIEVE,” AND OTHER
WORDS AND TERMS OF SIMILAR MEANING IN CONNECTION WITH A DESCRIPTION OF
POTENTIAL EARNINGS OR FINANCIAL PERFORMANCE. (source)

What you see on the sales page isn’t exactly typical earnings of what you can make with gaming. And the testimonials could also be showing how much they are projected to make, meaning the number they give is how much they’ll make, if they keep making the same amount of money they’re currently making.

So nothing that you’ve seen on the sales page is what you will probably make if you choose to sign up to his business.

Is Gaming Jobs Online A Scam?

GJO isn’t a site that I would recommend. I wouldn’t call them a scam, but neither would I call them something that is worth your while.

Their site hasn’t been updated in a while, they haven’t posted to their blog in 4 years, and the jobs they have are no longer available. Definitely not something you should look into.

Can you make money with gaming?

Making money with gaming isn’t as easy as it may sound. If you can get a job at an actual gaming company, my guess is that you can actually make enough money to live off of. But I doubt you could be a freelance game tester.

While gaming is fun, I would recommend looking for other ways to make money online, as there are probably just as much ‘fun’ type of online jobs out there.

If you are interested in making money online, feel free to check out my review of the best scam-free program that I’ve found so far!